Meeting at the airport in Ganja

Arriving in the city center and accommodation in a hotel.

Tour of Ganja, the second largest city of Azerbaijan:

Ganja has an interesting historical past:. The birthplace of Nizami Ganjavi, great Azerbaijani poet 12th century, the mausoleum is not to be missed and not to give tribute to this great poet, whose works included in the UNESCO heritage.

Ganja we will see the mosque of Shah Abbas, Chyakyak Hamam, built in the same years, the mausoleum of Javad Khan, the Orthodox Church of Alexander Nevsky and the bottle house built in the postwar years in Ganja, atakzhe walk through central aploschadi with fountains and the park "Khan Bagi ". 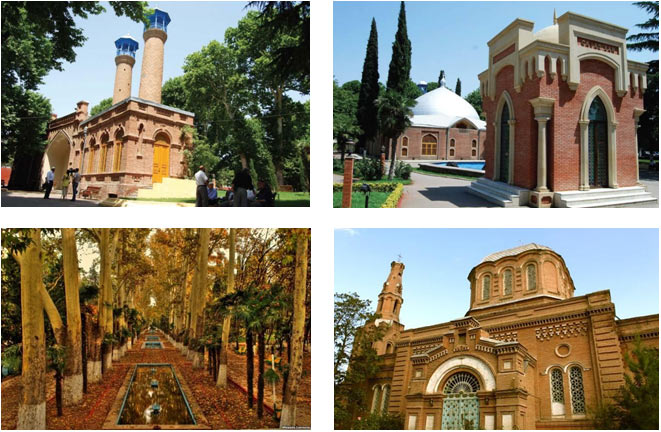 Letting rooms and travel to Baku

On the way to lunch at a local restaurant with the Azerbaijani national cuisine.

If the weather is good and will pozaolyat time, we can visit the mud volcanoes.

Gobustan - a mountainous area on the south-east of the Caucasus Mountains, located 60 km from Baku, is the territory on which lived ancient chelovek.Naskalnye Gobustan belong to different epochs and dated by 10- 8 millennia BC to the Middle Ages.

Dinner at the restaurant.

Lunch in a restaurant in the Old Town.

Sightseeing tour of Baku, in which:

You will see the palaces and villas of oil tycoons, built during the oil boom in the period from 1870 to 1918 yy .. and visit the Alley of the victims, with a magnificent view of the Baku bay.

Dinner at a restaurant with traditional cuisine of Azerbaijan.

Tour of the Absheron Peninsula:

"Yanardag" in the village of Muhammad (natural eternal flame burning since ancient times on the hillside).

On the way lunch.

Free time. You can take a walk on the boulevard or through the pedestrian zone, or visit one of the Baku museums (Museum of History of Azerbaijan Carpet Museum, Art Center or the Heydar Aliyev).

Dinner at a restaurant with traditional Azerbaijani national cuisine and show programs.

On the way to Shamakhi, visiting the mausoleum of Diri Baba near Maraza (now Gobustan).

Visit and inspection of the Juma Mosque, the oldest mosque in Azerbaijan from ancient times there was only a foundation and layout.

Lunch at a local restaurant with the Azerbaijani national cuisine

A trip to Sheki

Dinner at the restaurant with Sheki Sheki kitchen.

A trip to the village of Kish, a visit to the ancient Christian church, not only in the Caucasus but also throughout Europe and Central Asia, erected in the 1st century AD

A trip to Gakh, paradise created by God on the earth.

A trip to Ganja.

Dinner at the restaurant with dishes kitchen Ganja.

A visit to the mausoleum of Nizami Ganjavi

A trip to the city and the lake Goygol Goygol, one of the largest lakes in Azerbaijan. It was formed as a result of the devastating earthquake near Gyandzhi30 sentyabrya1139 year, which resulted in the top of the mountain Kapaz collapsed in Agsu river gorge.

Lunch on the road.